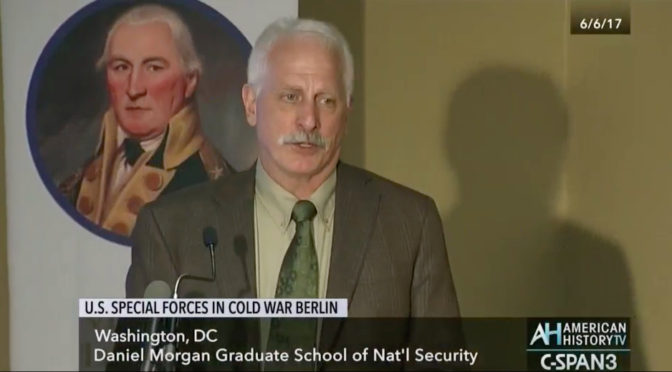 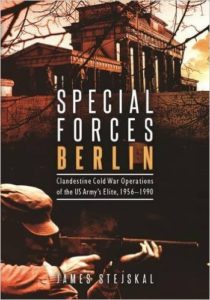 Highly classified until only recently, two U.S. Army Special Forces detachments were stationed far behind the Iron Curtain in West Berlin during the Cold War. The units’ existence and missions were protected by cover stories, their operations were secret.

The massive armies of the Soviet Union and its Warsaw Pact allies posed a huge threat to the nations of Western Europe. US military planners decided they needed a plan to slow the juggernaut they expected when and if a war began. The plan was Special Forces Berlin. The first 40 men who came to Berlin in mid-1956 were soon reinforced by 60 more and these 100 soldiers (and their successors) would stand ready to go to war at only two hours’ notice, in a hostile area occupied by nearly one million Warsaw Pact forces, until 1990.

Their mission should hostilities commence was to wreak havoc behind enemy lines, and buy time for vastly outnumbered NATO forces to conduct a breakout from the city. In reality it was an ambitious and extremely dangerous mission, even suicidal. Highly trained and fluent in German, each man was allocated a specific area. They were skilled in clandestine operations, sabotage, intelligence tradecraft and able to act as independent operators, blending into the local population and working unseen in a city awash with spies looking for information on their every move.

Special Forces Berlin was a one of a kind unit that had no parallel. It left a legacy of a new type of soldier expert in unconventional warfare, one that was sought after for missions such as the attempted rescue of American hostages from Tehran in 1979. With the U.S. government officially acknowledging their existence in 2014, their incredible story can now be told.

Styk is also the author of the book  The Horns Of The Beast: The Swakop River Campaign & World War I In South West Africa, published by By Helion & Company.

The book,tells the story of the South African Army in its first foreign operations and the German Schutztruppe’s defense of their colony, German South West Africa, during World War I from 1914-1915. It will be available on Amazon this month.

Styk lived in Namibia from 2010 to 2013 and researched the history and battle sites on the ground. He used primary sources, along with accurate maps and charts of the battles, to shed new light on General Botha’s strategy and his opponent’s defense.