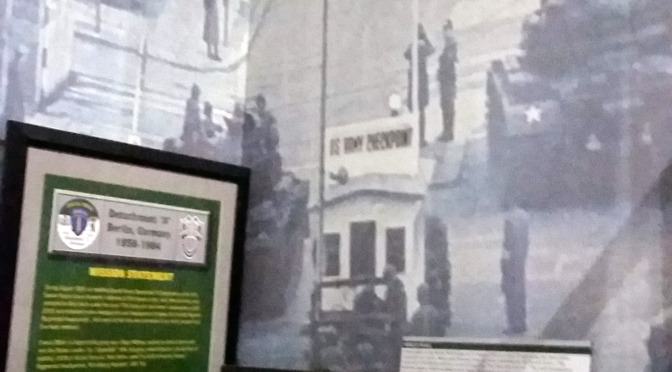 At the 2004 SFA Convention in Las Vegas, Bob Charest developed an awareness that  Detachment ”A” seemed to be fading into the shadows of history.

After previously visiting the JFK museum, he noticed that there was no Detachment “A” representation there and thought it would be a great first step into bringing Detachment ”A” back from its disintegrating and forgotten history. Bob had a conversation with Roxanne Merritt the Director of the FJK Special Warfare Museum about creating a Detachment “A” exhibit at the JFK museum.  He did not want Detachment ”A” to completely fade away, and since this seemed to be a place to start, he asked Roxanne if this would be feasible and she agreed informing him that artifacts needed to be collected for the exhibit, and she would design  and plan the exhibit display.

During the intervening years, Bob started hosting small DET-A Get together’ s,  and Detachment ”A” interest reemerged and started to grow and grow.

In 2010, Bob initiated a project with the mission statement:  Detachment (A) JFK Museum Representation.  With the help of all Detachment “A” members, and Roxanne Merrit, he believed it could happen. He called upon Detachment”A” members to donate artifacts to the museum for the exhibit, and he got an exceptional response. Detachment”A” artifacts started arriving the JFK Museum.

In May 2011, at the Detachment “A” Asheville NC Get Together, Bob invited Roxanne Merritt to the function to provide an update on the exhibit.  Many DET-A Members brought their artifacts with them to hand over to Roxanne.  The mission statement prepared by Hilmar Kullek would be used as our focal point.  Harvey Cox produced an 18×18 professional replica of the condensed Mission Statement.  Some of the Det(A) Artifacts pledged:

Along with many other donated items.