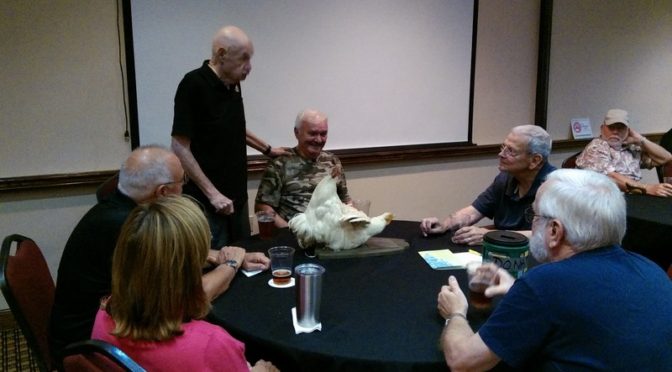 One last wish from CSM Jeff Raker, was to donate the Chicken Friday plaque he received upon his departure from Detachment”A” in 1981, to the members of Detachment”A”.

Chicken Friday was created back in the 1971-1972 era with SGM Tony Kriculi, and MAJ Sid Shachnow.  In the 1970s era, Detachment”A” annexed the old HQ & HQ company mess hall kitchen right next door to the Detachment”A” building.  It was renovated by Detachment”A” members into a Day Room complete with a bar, which was annexed from the hospital.  The Day Room also included a pool table, a parachute canopy over the bar, and beer from Czechoslovakia called “Budvar”, not local beer i.e., Schultheiss and Berliner Kindl.  It was improved during the years leading up to the deactivation of the Detachment in 1984.

On Friday afternoons we had a formation and assigned tasks for various cleanup areas, vehicle maintenance, and other such upkeep duties.  These activities lasted about two hours which then turned into “Chicken Friday”, a social gathering and bier fest for the rest of the evening.  Because of our compartmentalization, and not much downtime among us for socializing, it became a highly anticipated event.  Chicken Friday was frequently attended by Navy Seals from Crete, teams from 10th Special Forces attending our classified city training course, and the German Secret Police whom we worked with.  Chicken Friday and the fest after, was a really big morale booster for the men of Detachment”A” and helped keep “What happened in the Detachment, stayed in the Detachment”.

At our last Detachment”A” function in Asheville on Friday 16 September of 2016, Jeff Raker presented the plaque he received in 1981, to our Chicken Friday.  He hand carried this symbolic artifact all the way from Guam, and it came with him first class – 35 years later.  After the meeting Kevin Monahan suggested that the plaque be donated to the JFK museum.  Bob Charest secured the Chicken Friday plaque and will ensure the plaque is transported to Roxanne Merritt, the JFK museum director/curator where she will ensure that it will reside and serve as part of Detachment”A” history.

This historic Chicken Friday plaque presented to CMS Jeff Raker back in 1981 is being donated to the JFK Museum on behalf of all the men from Detachment”A” 39TH Special Forces.