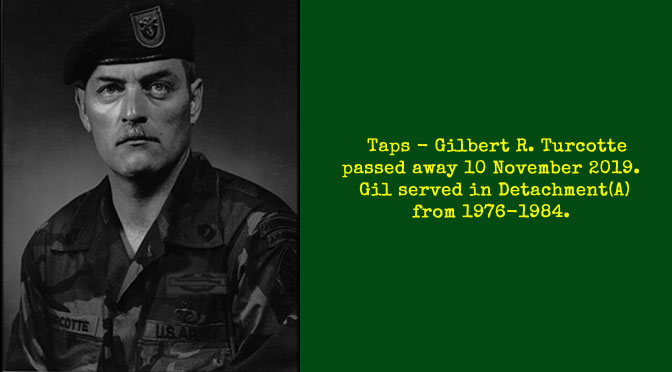 Folks, sad news.   Our brother Gil Turcotte passed away on 11/10/2019.  Gil was a generous man, full of caring for all of us. One hell of an SF TROOPER. He will be sadly missed among his Detachment (A) family.

The service began with a Color Guard unit made up of the three law enforcement departments that SGM Gilbert Turcotte worked with plus the Maine Army National Guard soldier in dress blues carrying the US Army Flag. Then the Maine State Select (the best in the state) honor guard brought the folded Colors and the Urn to the table in the front. Followed by a female army guard singing the National Anthem.   This was followed by the Invocation by LTC Earl Weigelt Maine National Guard Chaplain.

Then speakers from the Agency Gil worked for in order:

Next came remarks from folks present which was well over 100.

Detachment”A” members Douglas Curry, Ron Russell, and Ric Patrick attended along with former army buddies of Gil including “Smitty”, and Steven Boyd were also in attendance.

This was followed by Dot given her emotional remarks.

A poem read at a lot of Vietnam veterans funeral was then recited by MSG retired Ryan Hewins.

The poem was followed by Gil’s one and only request:  to have the Ballard of a Green Beret by SSG Sadler.

This was followed by LTC Earl Weigelt Chaplain Maine Army National Guard. Once his remarks were over the Honor Guard standing outside at attention in the pouring rain gave the 21 gun salute.

Two SSG performed the unfolding then re-folding of the colors which was presented to Dot.

After the ceremony a catered reception was held in the camps dining hall.

This is a link to an article from the Central Maine Newspaper. 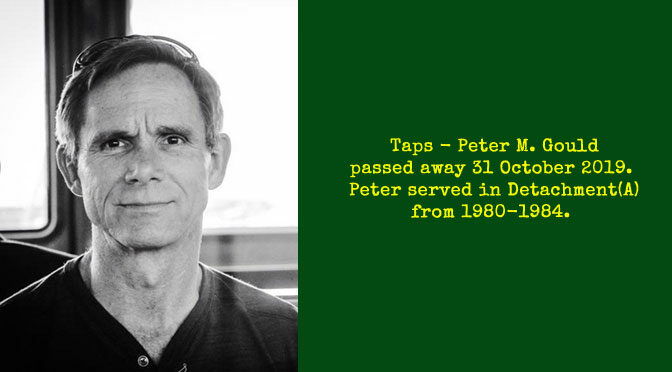 A Celebration of Life was held on December 14, 2019 at the Contoocook Fire Station, 9 Pine Street, Contoocook New Hampshire .  Detachment”A” members Doug Curry and Ron Russell were in attendance. 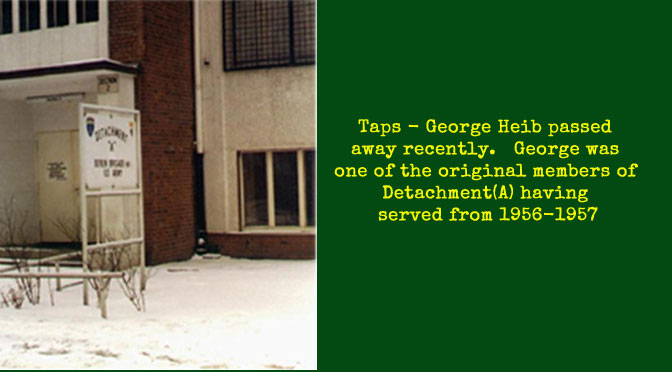 George Heib recently passed away.  George was one of the original members of Detachment(A) having served from 1956-1957.

No further information available at this time. 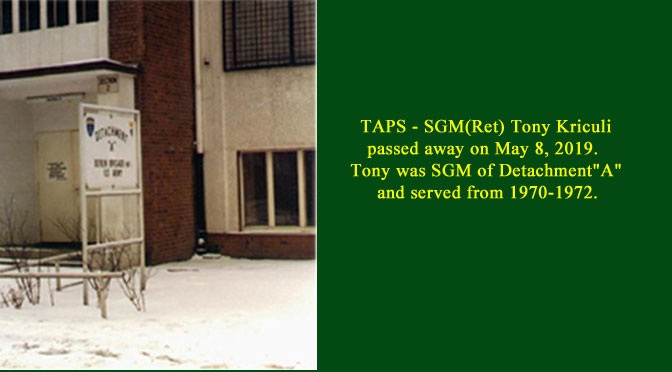 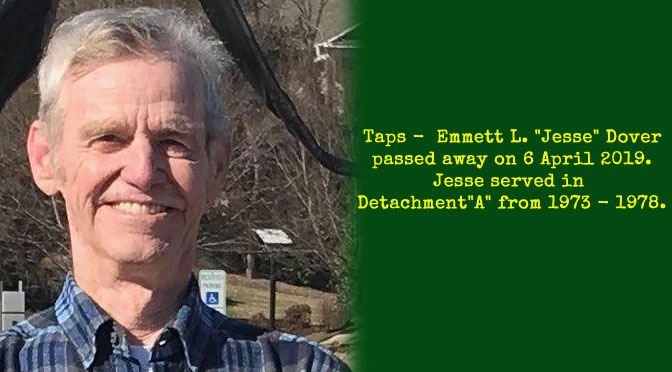 Jesse requested cremation without any fanfare. I will pick up  the  ashes and wherever I go, he will go with me.

He wants everyone to remember him the way he was, he suffered enough.

He was the love of my life and death will not separate us. 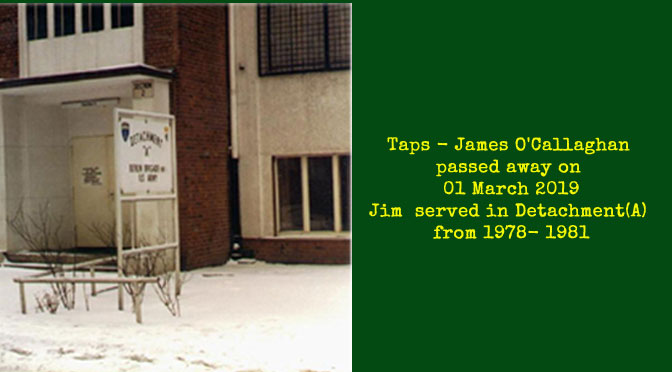 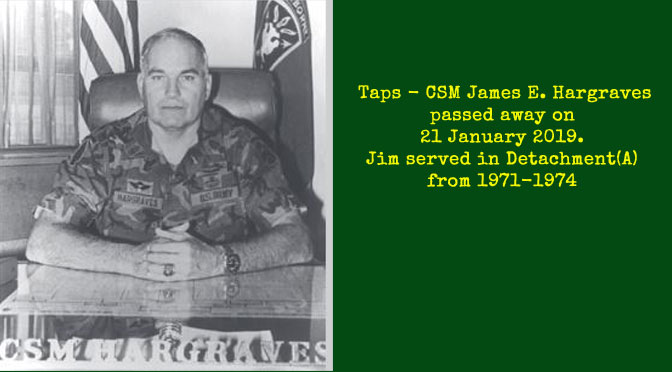 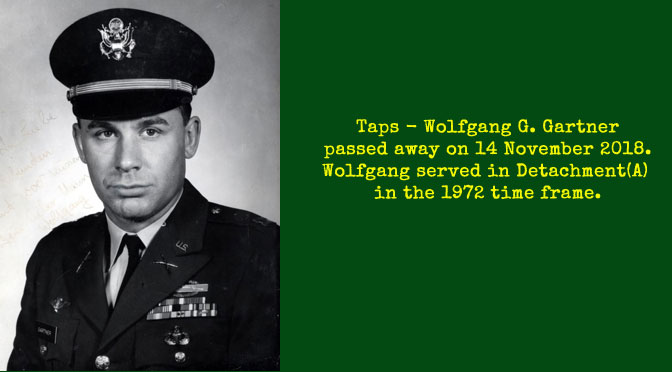 Wolfgang G. Gartner passed away on 14 November 2018.
Wolfgang served in Detachment(A) in the 1972 time frame. 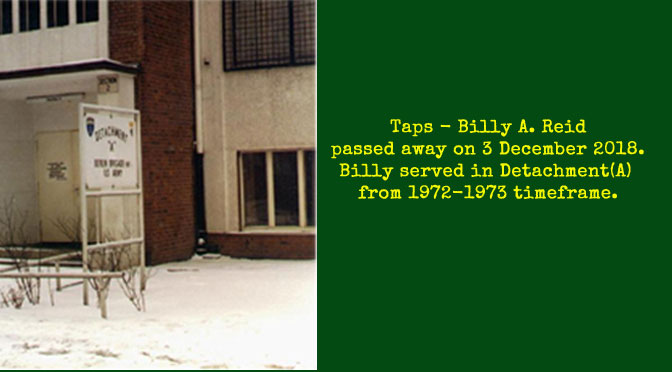 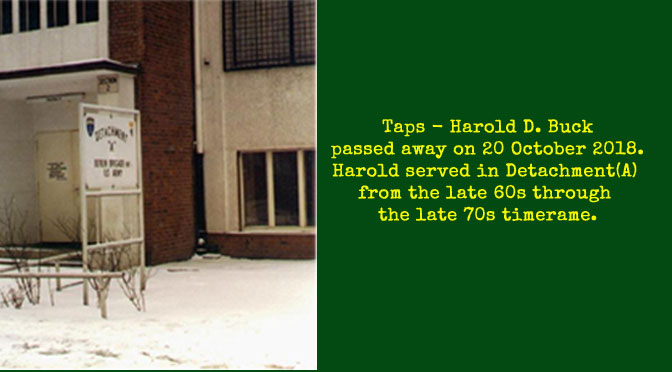 Harold D. Buck passed away on 20 October 2018.
Harold served in Detachment(A) from the late 60s through the late 70s timeframe. 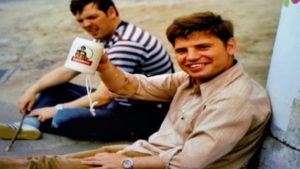