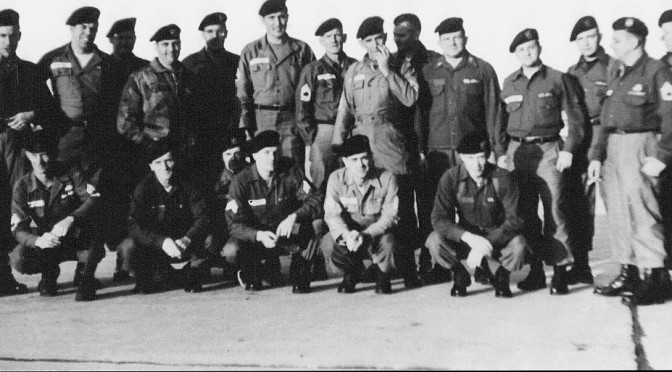 Museum at Fort Bragg to reopen 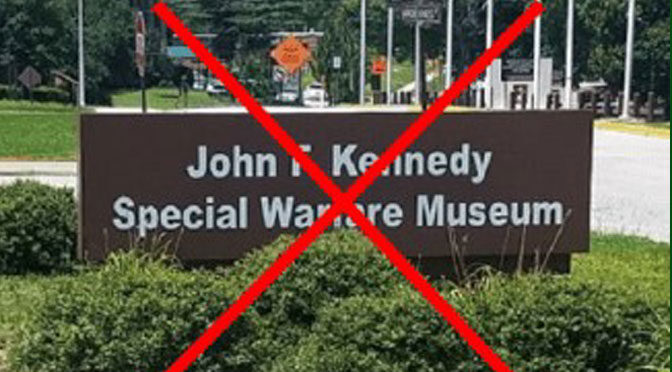 The following article written by John Friberg of  SOF News announcing  the closure of the Special Warfare Museum on FBNC. 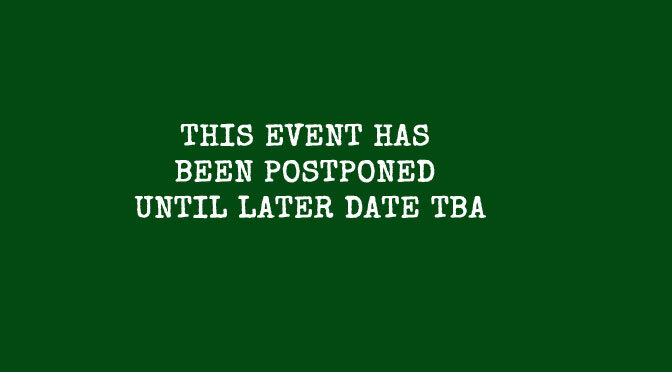 This event has been postponed to a later date to be announced.

David Jackson and Chapter XI president Ray Oden are contacts for this event. 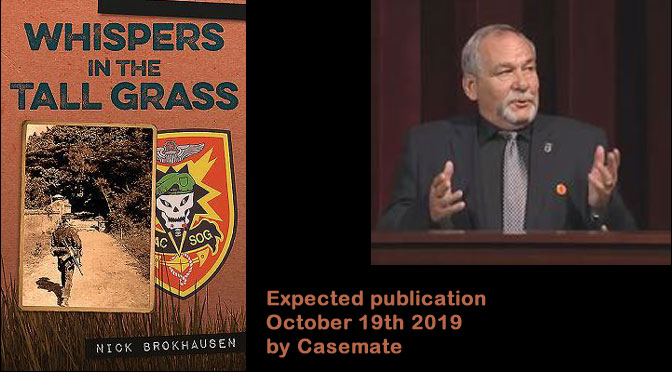 Former Member of Detachment”A” Nick Brokhausen has written his second book entitled “Whispers in the Tall Grass with an expected publication date of 19 October 2019.

On his second combat tour, Nick Brokhausen served in Recon Team Habu, CCN. This unit was part of MACV-SOG (Military Assistance Command Vietnam Studies and Observations Group), or Studies and Observations Group as it was innocuously called. The small recon companies that were the center of its activities conducted some of the most dangerous missions of the war, infiltrating areas controlled by the North Vietnamese in Laos, Vietnam, and Cambodia. The companies never exceeded more than 30 Americans, yet they were the best source for the enemy’s disposition and were key to the US military being able to take the war to the enemy. This was accomplished by utilizing both new and innovative technology, and tactics dating back to the French and Indian Wars.

This small unit racked up one of the most impressive records of awards for valor of any unit in the history of the United States Army. It came at a terrible price, however; the number of wounded and killed in action was incredibly high. Those missions today seem suicidal. In 1970 they seemed equally so, yet these men went out day after day with their indigenous allies – Montagnard tribesmen, Vietnamese, and Chinese Nungs – and faced the challenges with courage and resolve.

Whispers in the Tall Grass is the second volume of Nick’s riveting memoir of his time with MACV-SOG. Written in the same irreverent, immediate style that made We Fewi a cult classic, he continues his hair-raising adventures behind enemy lines, and movingly conveys the bonds that war creates between soldiers. 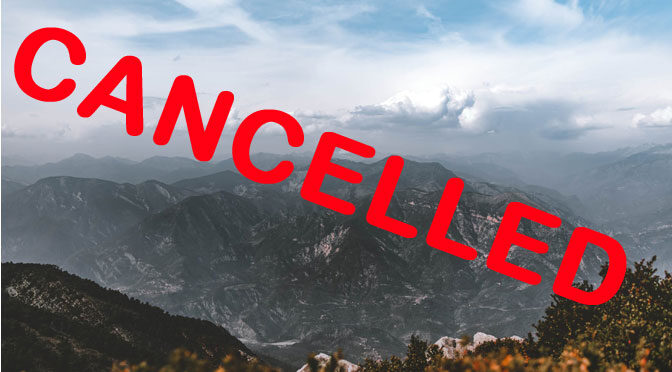 The 2020 Detachment”A”/PSSE Special Forces Berlin 2020 get together that was to be held in Colorado Springs, Colorado from 17 – 20 September 2020 has been cancelled.

This event will be rescheduled for a future date.  More info to follow when date has been selected. 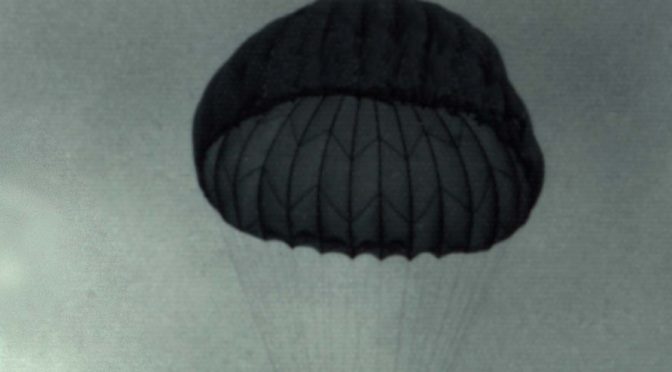 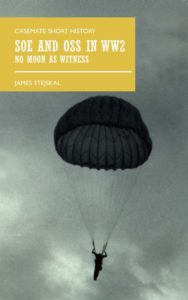 Detachment “A” member and author James Stejskal has a new book entitled SOE and OSS IN WW2, No Moon as Witness that will be released in November 2019.

“In 1940, Winston Churchill famously instructed the first head of the Special Operations Executive, Hugh Dalton, to “Set Europe ablaze!.” Agents of both the British Special Operations Executive and the American Office of Strategic Services underwent rigorous training before making their way, undetected, into occupied Europe to do just that. Working alone or in small cells, often cooperating with local resistance groups, agents undertook missions behind enemy lines involving sabotage, subversion, organizing resistance groups and intelligence-gathering.SOE’s first notable success was the destruction of a power station in France, stopping work at a vital U-boat base, and later operations included the assassination of Himmler’s deputy Reinhard Heyrich and ending the Nazi atomic bomb program by destroying the heavy water plant at Vemork, Norway. OSS operatives established and supported anti-Nazi resistance groups across Europe, and managed to smuggle operatives into Nazi Germany, including running one of the war’s most important spies, German diplomat Fritz Kolbe. All missions were incredibly dangerous and many agents were captured, tortured, and ultimately killed  the life expectancy of an SOE wireless operator in occupied France was just six weeks.

In this short history, historian James Stejskal examines why these agencies were established, the training regime and ingenious tools developed to enable agents to undertake their missions, their operational successes, and their legacy.” 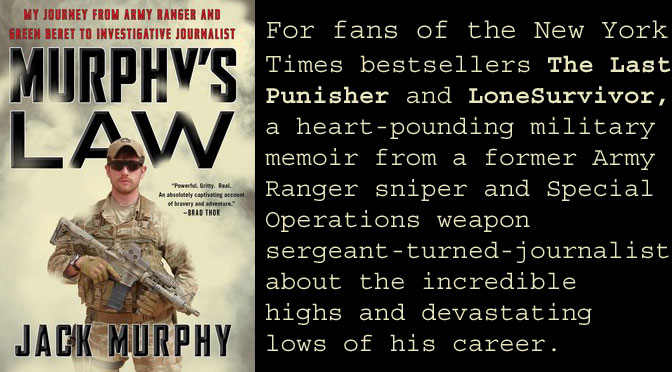 Detachment A: the Cold War Sabotage Experts of Special Forces published on 27 April 2016.

Detachment A: Clandestine Special Forces Missions from Berlin to Iran a four-part series of articles:

Part 4:  Detachment A: Final missions, the wall comes down, and the end of an era published 10 February 2017

ABOUT THE BOOK:   For fans of the New York Times bestsellers The Last Punisher and Lone Survivor, a heart-pounding military memoir from a former Army Ranger sniper and Special Operations weapon sergeant-turned-journalist about the incredible highs and devastating lows of his career.

Growing up in small New York towns, Jack Murphy knew he wanted to lead a life far from the ordinary—a life of adventure and valor. After the 9/11 attacks, he immediately enlisted in the Army, knowing this was his chance to live the life he desired and fight for a cause he staunchly supported. After making it through the rigorous Ranger Indoctrination Program, he graduated sniper school and was promptly deployed to Afghanistan, where his experiences went from ordinary to extraordinary.

In this gripping military memoir, Murphy recounts the multiple missions he underwent as a Ranger, a Special Forces weapons sergeant, and ultimately, a boots-on-the-ground journalist. From enemy ambushes, dodging explosives, crashing terrorists’ weddings, and landing helicopters in the streets of Mosul, Jack provides a hard-hitting glimpse of what combat is like in some of the world’s most dangerous, war-torn places. With tours of duty in two of the most decorated units of the armed forces, Murphy brings a unique perspective to the military genre as he reflects on his great triumphs and shattering failures both on and off the battlefield.

Later, Murphy turned his attention to breaking news within the military. His stories have taken him from Iraq to Switzerland, from Syria to South Korea. From crossing Middle Eastern borders in the dead of night, to rolling into an IED-laden zone, Murphy’s stories are always a thrill a minute. 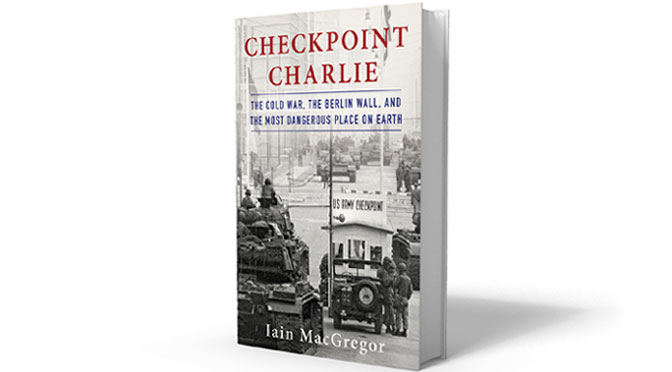 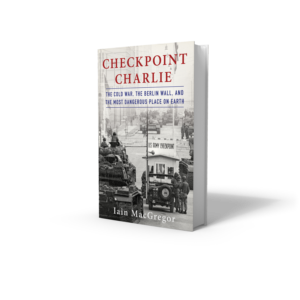 Checkpoint Charlie The Cold War, The Berlin Wall, and the Most Dangerous Place On Earth By Iain MacGregor published by Simon & Schuster will be available October, 2019.

Bob Charest and James Stejskal provided input to this book.

Link to order this book on Amazon.com

A powerful, fascinating, and groundbreaking history of Checkpoint Charlie, the famous military gate on the border of East and West Berlin where the United States confronted the USSR during the Cold War.

East Germany committed a billion dollars to the creation of the Berlin Wall in the early 1960s, an eleven-foot-high barrier that consisted of seventy-nine miles of fencing, 300 watchtowers, 250 guard dog runs, twenty bunkers, and was operated around the clock by guards who shot to kill. Over the next twenty-eight years, at least five thousand people attempted to smash through it, swim across it, tunnel under it, or fly over it.

In November 1989, the East German leadership buckled in the face of a civil revolt that culminated in half a million East Berliners demanding an end to the ban on free movement. The world’s media flocked to capture the moment which, perhaps more than any other, signaled the end of the Cold War. Checkpoint Charlie had been the epicenter of global conflict for nearly three decades.

As the thirtieth anniversary of the fall of the Wall approaches in 2019, Iain MacGregor captures the essence of the mistrust, oppression, paranoia, and fear that gripped the world throughout this period. Checkpoint Charlie is about the nerve-wracking confrontation between the West and USSR, highlighting such important global figures as Eisenhower, Stalin, JFK, Nikita Khrushchev, Mao Zedung, Nixon, Reagan, and other politicians of the period. He also includes never-before-heard interviews with the men who built and dismantled the Wall; children who crossed it; relatives and friends who lost loved ones trying to escape over it; military policemen and soldiers who guarded the checkpoints; CIA, MI6, and Stasi operatives who oversaw operations across its borders; politicians whose ambitions shaped it; journalists who recorded its story; and many more whose living memories contributed to the full story of Checkpoint Charlie. 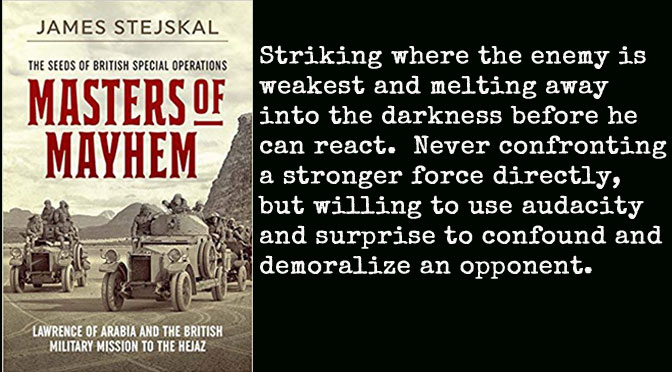 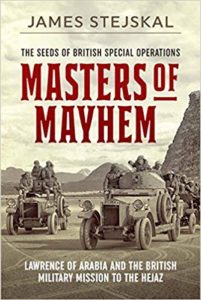 Stejskal has written his third book entitled Masters of Mayhem.

Striking where the enemy is weakest and melting away into the darkness before he can react. Never confronting a stronger force directly, but willing to use audacity and surprise to confound and demoralize an opponent. Operations driven by good intelligence, area knowledge, mobility, speed, firepower, and detailed planning executed by a few specialists with indigenous warriors – this is unconventional warfare.

T. E. Lawrence was one of the earliest practitioners of modern unconventional warfare. His tactics and strategies were used by men like Mao and Giap in their wars of liberation. Both kept Lawrence’s Seven Pillars of Wisdom close at hand. This book looks at the creation of the HEDGEHOG force, the formation of armored car sections and other units, and focuses on the Hejaz Operations Staff, the Allied officers and men who took Lawrence’s idea and prosecuted it against the Ottoman Turkish army assisting Field Marshal Allenby to achieve victory in 1918.

Stejskal concludes with an examination of how HEDGEHOG has influenced special operations and unconventional warfare, including Field Marshal Wavell, the Long Range Desert Group, and David Stirling’s SAS. 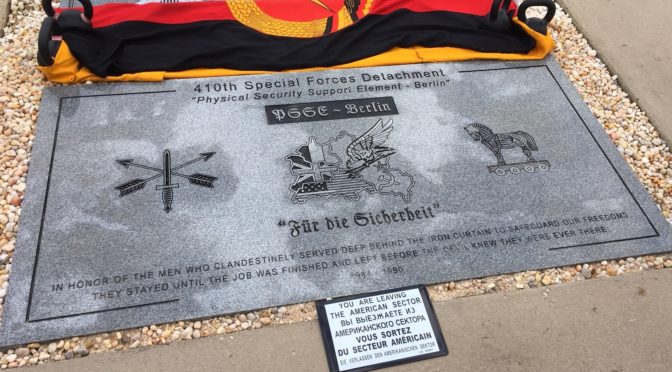 The following article was posted by the
Fayetteville Observer Article