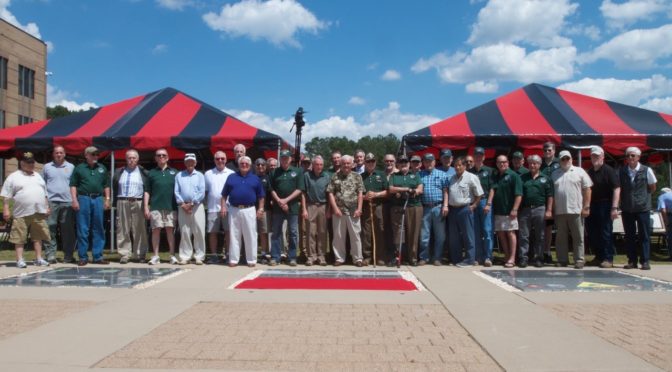 The annual Detachment “A” function was held at Fort Bragg, NC from Thursday, 8 June 2017 through Sunday 11 June 2017 in memory of CSM Jeffrey Raker.

This was truly a special function at Fort Bragg in memory of our comrade Jeff Raker. It was special in so many ways. We had a great showing for this function and a great time with our Detachment “A” brothers.

This function was originally to be held in Asheville, but Jeff Raker always wanted to have one at Fort Bragg at Moon Hall, so at our last Asheville function in which Jeff Raker attended, I informed him and all of you that our next function would be in honor of Jeff Raker and we would have it at Fort Bragg in conjunction with the SFA Convention. He was thrilled and told me he would be there. Sadly, Jeff passed away in November so I re-dedicated the function to be in memory of Jeff Raker.

Jeff Raker’s wife Minako and their sons and other family members attended. Jeff’s grandson Jeff was also present and while on the Fort Mackall tour Minako and his mother said “One of these days he will be right here at Camp Mackall for the selection course”.

Jeff Raker’s Chicken Friday plaque which he brought to our September 2016 Asheville NC function all the way from Guam has a new and permanent home. The unique nature of the plaque made it ineligible for the JFK Museum. After I notified you all of this, Glen Craig made a recommendation that we donate it to SFA HQ. I thought this was a great idea, so I coordinated with Roxanne Merritt Director, JFK Special Warfare Museum and Cliff Newman Executive Director of SFA who said he would be honored to have it. Many thanks for Glen’s suggestion and many thanks to Cliff Newman and SFA for giving this special artifact a permanent home.

A few members showed up early on Wednesday and we enjoyed time together as usual, including my main point man Gil Turcotte. My other main point man Sid Williams had a flight cancellation so he arrived a day late. Others included John Lee, Chris Feudo, Rick Westbrook, Steve Bright, Lee Fondas, and Bob Charest.

Gil Turcotte brought with him a large eagle-cane based plaque which he is donating to the JFK museum on behalf of Detachment “A” members.

Earlier in the year, Gil called Bob Charest and discussed a concept and idea he had for making of a Detachment “A” plaque. Bob said ‘go for it’. Gil came up the concept and design, hired an artist to construct the plaque, and paid for it. Gil put a lot of thought into this plaque.

One of the many features of this plaque is the space for Detachment “A” members to sign their name along with the dates they served in Det “A”.

A full description of the plaque was written up posted separately on our web site.  A copy was sent to Roxanne Merritt JFK Museum Director to accompany the plaque.

Gil honored Bob by requesting that he be the first member to sign the artifact directly under the head of the eagle because “Bob brought Detachment “A” in from the cold and made it prominent”.

All other members present also signed their names and dates served in Detachment ”A”.

The meeting on Thursday featured our distinguished guest speaker MG Jim Guest(Ret) former Commanding General, United States Army Special Forces Command.  MG Jim Guest(Ret) has been to all of our functions and gave a pronounced, and notable speech. His speech began with heartfelt remembrances of Jeff Raker with whom he served with for many years and who was his close friend. He said he loved the man as we all did.

After MG Jim Guest’s speech, Gil had CSM Jeff Raker’s son Jeff sign the plaque on his father’s behalf and in his honor.

Gill then caught up with our distinguished guest speaker MG James Guest’s(Ret) and obtained his signature on the plaque.

Gill Turcotte also passed around a get well card for our Special Forces Detachment “A” brother Peter Gould which was signed by fellow Det “A” brothers.  We attempted to call him but could not get through.

The rest of the day was spent socializing and having a good time.

Friday started with the Camp Mackall tour, breakfast and lunch all set up and coordinated by our good friend and comrade Jack Tobin along with members of Chapter 6 including my good friend Joe Beasley. It was nothing short of outstanding. Detachment “A” members got the VIP treatment. The commander of the base LTC Wheeler and his XO along other staff set us up for breakfast at the Camp Mackall dining facility. We ate our chow at the outdoor picnic area where the students do the same.

LTC Wheeler and his staff gave us a VIP tour and a formal comprehensive briefing. They spent quite a bit of time with us and we really appreciated the exceptional treatment and the accommodations made for all of us. They spent half the day with us and gave Detachment “A” the red carpet treatment.

This event was well received. I am in the process of generating a special letter of thanks and appreciation to LTC Wheeler and his staff for all their efforts on behalf of all our Detachment “A” members.

The pay-as-you-go lunch was prepared by Jack Tobin and Chapter 6 members. It was a superb spread including BBQ, Beef Brisket, Spiral Cut Ham, Baked Beans, Cole Slaw, Iced Tea, Rolls, Appropriate Sauces and Condiments, and rolls. All proceeds go to the Chapter 6 team house construction fund. Jack said he had a lot of fun cooking up all the food. He is truly a class act.

The main event was the Photo Op Ceremony in Memory of Jeff Raker out at our Detachment “A” memorial stone at the USASOC Memorial Plaza on Friday afternoon. We received the full VIP treatment from USASOC and PAO and a red carpet literally. USACOM recorded the entire event on video, took professional pictures and held video interviews with various Detachment “A” members. They also had Paraglide present to write an article.

The Fayetteville Observer was present to cover the events, and performed many interviews.

When these articles are published, they will be available on the web site.

The two biographer teams Barry Duplantis and Mark Valley along with Keith Jeffreys and his crew were also present to witness this event.

Special thanks to MSG Calvin Castleberry who was my main POC. He worked extremely hard on this event and provided endless professional support. Cal is the epitome of an outstanding SF trooper. I invited him to Moon Hall to socialize with the guys after the Photo Op, and he showed up and spent the entire evening. He enjoyed being with the guys so much that he asked if he could come to our next function, and I said absolutely, he will be on our guest list for next years’ function.

The Photo Op was the highlight of this years’ function. We all gathered at the USASOC Memorial Plaza at our Detachment “A” memorial stone. Notable attendees included: LTG Kenneth E. Tovo, MG Sidney Shachnow(Ret) who was the main guest Speaker, and MG James Guest(Ret) former Commanding General, United States Army Special Forces Command who joined our Detachment  “A” members for this special event.

When MG Shachnow arrived on the scene Bob went to greet him and he gave Bob Charest a bear hug that was long and embracing. Bob escorted him to the seated area where MG Shachnow was greeted by MG Jim Guest and many of his comrades. When he was seated, Paco Fontana came over to speak with MG Shachnow who gave Paco a strong embrace and bear hug. Paco’s wife Lisa captured the moment and it is displayed prominently on our web site.

Bob Charest introduced the event and spoke a few words about how this function was being held in memory of CSM Jeff Raker(Ret). He then introduced MG Sidney Shachnow(Ret) former Detachment “A” commander our honored guest speaker. MG Shachnow’s speech was to his usual standard, excellent. He began his speech by recognizing Bob Charest for all the work he did to bring Detachment “A”   in from the cold and  into history. 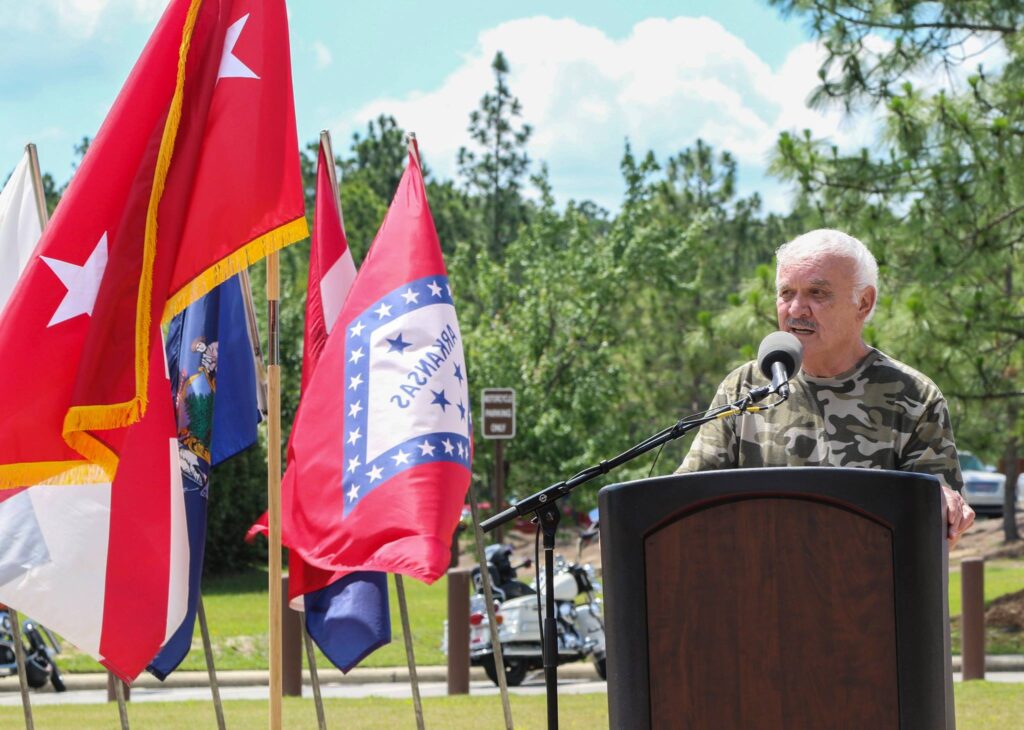 MG Shachnow then went on to highly recommend that everyone read Styk’s book. Styk’s book is entitled: Special Forces Berlin: Clandestine Cold War Operations of the US Army’s Elite, 1956–1990.  Buy it and read it.

He reminisced and talked about the Detachment “A” unit and all its members as only he can deliver. We were honored that he came out and grateful he was with us.

Bob then called on Gil Turcotte who presented the plaque he designed and had made to MG Shachnow who then donated to the JFK Museum on behalf of all Detachment ”A” members. Roxanne Merritt from the JFK museum was present to receive the plaque which will have its place in the museum.

We invited LTG Tovo and he was due to come to our function, time permitting as he had a prior commitment to preside over a retirement ceremony. We were very pleased that he was able to join us in this historical event in honor of Jeff Raker.  LTG Tovo met and spoke with many of our Detachment “A” members.

Saturday
On Saturday we had lots of time to socialize. Interviews were ongoing by the documentary crew. We all gathered at the German Restaurant for some good German food.

The rest of the day was spent socializing at the great outdoor area at Moon Hall.

The two biographer teams Barry Duplantis and Mark Valley along with Keith Jeffreys and his crew conducted numerous interviews and scheduled more. MG Shachnow was among those interviewed.  They gathered material for their biographical documentary film which is a collaborative project.

At the SFA convention Bob Charest met up with LTG Kenneth Tovo, Commander of the United States Army Special Operations Command, and thanked him and his staff on behalf of Detachment(A) for their support of this function in honor of Jeff Raker.

Minako Raker also attended the SFA convention with family members and before she departed for Guam she tearfully thanked all Detachment “A” members for dedicating this function to CSM Jeff Raker and his legacy.  She once again stated that her grandson Jeff, would one day wear the Green Beret.

Heidi Fedor’s lovely daughter of Howie and Sybille Fedor came to our function beautiful handmade wooden plaques carved by her boyfriend Jeremy. The plaque contained the Special Forces Berlin carving, the Brigade Patch, active dates of Det”A”, Detachment “A” Germany. She presented as a remembrance gift to Det”A” members. She presented one to Bob as well as a token of appreciation which a welcomed surprise, and he will treasure it always. Heidi has also provided lot of photos from our functions. We thank her so much.

The 2017 Detachment”A” Function in memory of CSM Jeffrey Raker was truly an amazing function. The function allowed Detachment “A” and others to honor our friend Jeff Raker in a way he so richly deserved, socialize and have a great time with each other, the way it should always be.  Jeff Raker told me long ago don’t change the format, and I have not. I will maintain the brotherhood and our sacred social no frill Detachment “A” functions.

Next year’s reunion will be held in Asheville NC as usual. I will be sending out the information as soon as it is finalized.